GMRS vs. FRS: What’s the Difference Between Both? 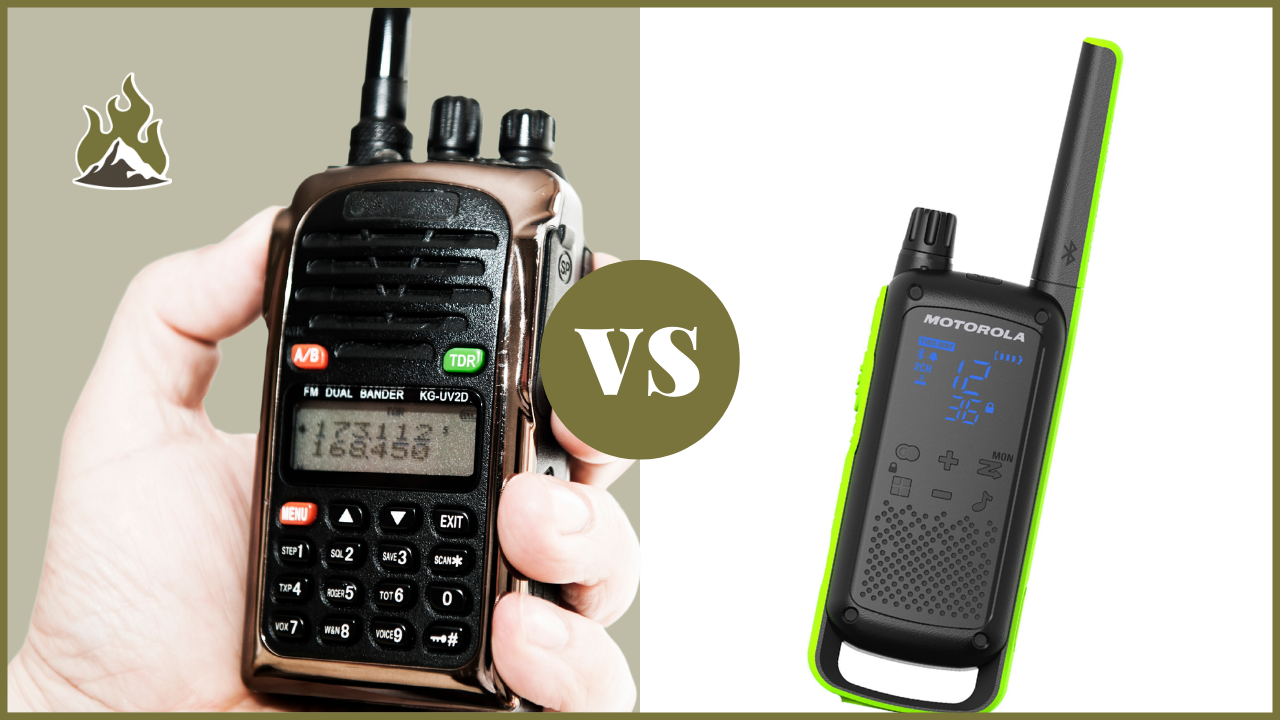 General Mobile Radio Service is a type of two-way communication a step below Ham radio. Family Radio Service, or FRS, is one of the most common radios found in homes around the country. Each can save your biscuits in a fire, but they have many differences that some might not know. So what is the difference between GMRS and FRS?

Learning about radio communications and how they work is an intricate and science-based world that can knock some people for a loop. However, the radios are similar and have some of the same benefits. So read on and learn all there is to know about the differences between GMRS and FRS radio.

The Differences Between GMRS and FRS

There was a time when there were radios on the market that would allow you to access both channels. In the 1990s, Radio Shack pushed the government to make a section of the radio band for family use of walkie-talkies that didn’t eavesdrop on radio stations or cordless phone calls. With a bit of work, they acquired 462MHz and 472MHz for FRS radio.

One of the biggest things about the two is that one is for hobbyists and the other is means to talk while working or another outdoor activity. There are some significant differences between the two, and by learning about GMRS and how it operates, you will begin to understand its uses and which one fits your purpose.

We also have an article comparing GMRS to CB here.

Some things about GMRS that differentiate it from FRS are:

GMRS radios are just a beefier version of the FRS walkie-talkie you see in the sporting goods aisle. They can connect over longer ranges with a repeater and have more power to cut through obstructions. They are also more complicated to operate. As you will see, the FRS radio was made for fun and the occasional disaster.

FRS is an Easy to Use Means of Communication

As the walkie-talkie became more prevalent on television and in the toy aisle, the people at Radio Shack knew a storm was brewing. They began to see the units fly off the shelves and realized that the tiny radios would cause interference up and down the band if someone didn’t intervene.

When the CB craze of the 70s took hold Radio Shack began to understand what needed to be done. So finally, in the 90s, they chatted with the FCC and had them start to think about making part of the band, 462MHz – 467MHz, available only to walkie traffic. But, of course, this opened the floodgates for the Spider-Man and CoCo Melon handhelds in the toy sections.

Some significant differences between an FRS and GMRS radio are:

FRS radios are great fun. They can give children hours of enjoyment playing in the woods or inside their apartment buildings. While they aren’t powerful, some can produce a signal that is clear and could be the last resort in an emergency.

There are Areas Where the Bands Could Overlap

One of the most popular questions is can an FRS radio connect with a GMRS radio, and the answer is yes. There are ways for the two to get comms, which is easier than you might think. Some channels will be reserved for specific types of traffic and should only be used in an emergency or as a last resort.

A few areas where the FRS and GMRS band could overlap are:

The overlap of the two does another thing that people don’t expect. It opens the world of communications up to those who might not know what is out there. This could inspire something in children that nudges them towards engineering or science careers.

The Radio Bands and What They Do

For preppers, knowing how to use Ham radio is critical knowledge. It gives you options that regular walkie-talkies don’t and teaches you things about the band that might not be evident to you. For example, it allows you to scan all the traffic on the band and learn how they operate with call signs and which ones are used only for emergencies.

Some things you learn about Ham radio as you use it are:

Ham radio is excellent for people looking to bounce a signal off the moon or communicate with someone beyond the horizon. What Ham does for preppers is provide a way to keep communications with the outside world and signal for help if there are any worsening problems or disasters.

GMRS and FRS are for Hobbyists and Weekend Warriors

The General Mobile Radio Service is a step down from Ham radio. It requires a fee to broadcast, and you will have to search out a GMRS radio as they are not often found in stores. However, they produce a strong signal with a range of over a mile and can be run on repeaters to reach even farther.

FRS is a walkie-talkie. It is push to talk with only a few reachable channels or frequencies. The critical thing to remember about FRS is that it was made for family recreational use and could be useless in some emergencies or disasters. Family Radio Service is accessible to everyone and should only be used in emergencies as a last resort.

A few things that GMRS/FRS are good for are:

GMRS and FRS radios can be helpful to people in several different situations but could be hazardous in a disaster. You should take the time to learn about all the radio bands as you could be forced to use them in a life-or-death situation.

GMRS and FRS radio share many things in common. They are both ways of radio communication used by industry and military groups for years and exciting science experiments for young children. However, GMRS is a step below Ham radio, and FRS are the walkie-talkies we know from childhood and our weekends hiking by the lake.

FRS was grooved out of the spectrum by the FCC in 1997 when walkies sold by companies began to interfere with everyday communications like wireless phones and radios. Radio Shack helped the FCC determine a lower band for family usage, and the Family Radio Service was begun.