How To Make a Lock Pick Gun 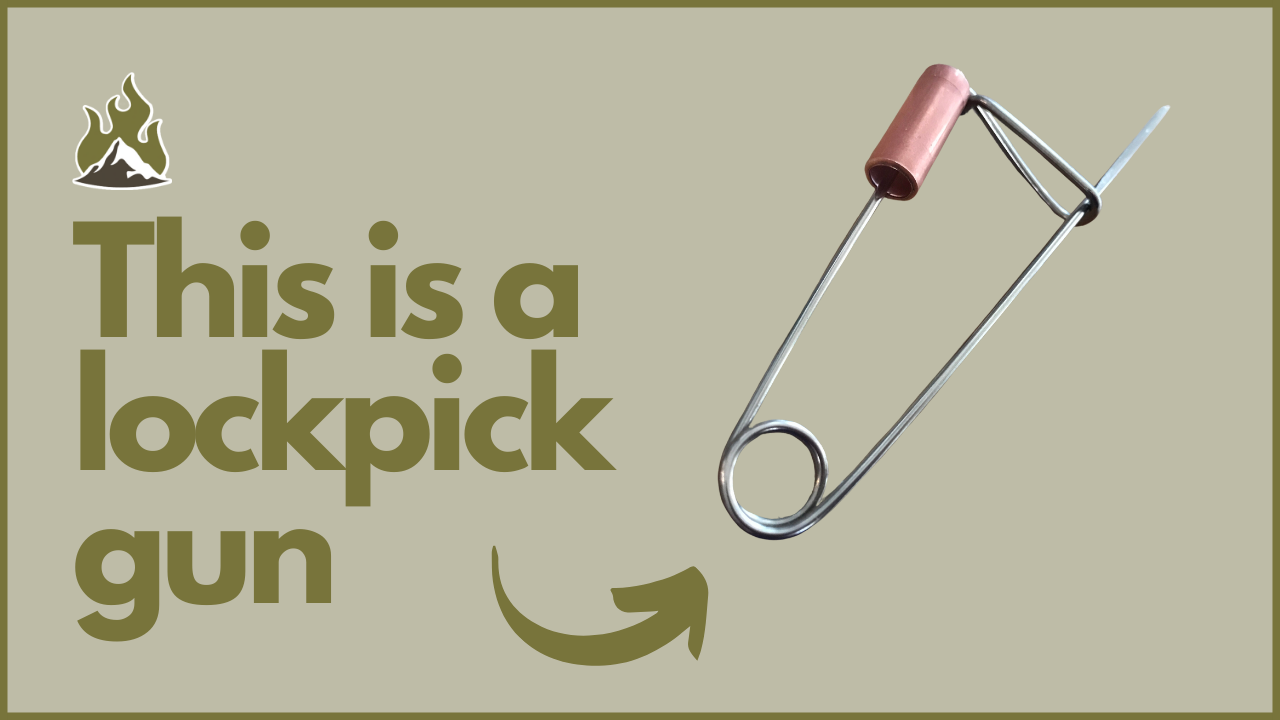 Several types of lock-picking guns can be assembled using everyday items found anywhere. Even the hooks can be made from pieces of scrap metal. Some popular options are available, and people have used anything to create a lock-picking gun, including a toothbrush!

Materials you will need are:

Let’s go over the steps below.

Make the Toothbrush Fit In the Keyhole

The first step in this process is to remove the toothbrush’s head and cut off the plastic molding around the shaft.

Move the Toothbrush In the Keyhole

Using something to apply turning pressure on the keyhole, you slide the electric toothbrush into the keyhole and turn the device on.

Homemade rake hooks are okay to use in these guns, as well as commercial rake hooks.

Afterward, use a heat source to mend the plastic and rake hook together, such as a lighter. Alternatively, super glue, rubber cement, or any strong adhesive will also do the trick.

Then power the razor on and watch the rake hook move forward and backward (raking the lock) over the pins inside the tumbler. Torque is still needed on the tumbler to open the lock; anything can be molded into a torque hook. Insert the rake hook into the tumbler and move the razor in and out of the lock in a front-to-back motion until the lock opens.

The shaving razor gun mimics the hand motion of using a rake. The razor method gives a slight advantage to lock pickers like the raking method and can open anything that could be found in a residential area.

However, higher security type locks could be resistant to using the shaving razor gun and may require hand-picking the locks.

Bending a coat hanger into a triangle shape or even a rectangle shape will help provide the snapping force that an electric lock-picking gun distributes. From there, attach a joiner piece that will hold the hook. Then attach the pick hook to the other end of the joining piece. Finally, bend the bottom portion of the clothes hanger to create a hook or stop on the end of the gun.

This Gun is Made with Only Three Things:

It might be hard to imagine, but the object should be fashioned so that when you pull the bottom portion of the hanger towards the top and release it, the edge of the device moves the pick hook fast and snaps it back into place. Then, using the gun is easy, and the same as a snap gun is used to open locks.

Do It Yourself with a Mini Rotor Motor, Batteries, and a Pick

A single rotary motor and a pick are all needed to create a small lock-picking gun. However, the simplest things can make the best parts of the lock-picking mechanism. The small rotary motor can be found in almost every electronic device with any motion inside the case, such as a DVD player, CD Player, and even some surround sound systems.

Fashion together a case holding the power source (single AA battery) and place the motor with the shaft side facing outward. Then attach the hook at the end of the rotary motor shaft and solder it together. Another method is to heat the pick with a lighter and mend the rotary motor piece with the pick.

The battery provides power to the motor, and the hook moves around inside the lock to help it open. These motors can be found in various devices and are perfect in an urban survival setting. The most complicated part of making this piece is the battery tray. Using any battery tray often works, but the old-fashioned tape and stick work too.

Making the hand picks is as simple as finding a small thin piece of scrap metal and grinding or filing down a slight curve on the pick’s edge. It need not be exact; the general shape of a small angle is enough to push the pins past the sheer line. The tension bar is created similarly and can be as easy as bending the tip of a bobby pin at a ninety-degree angle.

While several methods are used to pick locks, the lock pick gun only uses one. The raking method. This method is less popular than hand-picking the lock and is used before attempting to hand-pick it as it makes it more accessible. The raking method uses vibrations to put the pins above the sheer line.

The raking method is when the gun vibrates the pins inside the lock while simultaneously trying to turn the lock. This method is not always successful and can sometimes take a long time to work. However, the raking method takes an extraordinarily little skill and is perfect for beginning locksmiths. The raking method only works on locks that use the sheer line and pin system.

The raking method can be used with a gun or manual tools and is easy for beginners to learn. However, you have little control over the inside and how the lock responds to the rake method. Some locks may even have security built into the mechanism to prevent them from being raked, and it never works on high-security locks.

Tips for Using the Raking Method

The key to the raking method lies within the speed at which the Practitioner can effectively rake the lock. The pins may only be in place for seconds which is all that is needed to turn the lock.

Rakes can be made with paper clips, purchased, or even an attachment to a lock-picking gun. Single pin picking and raking together gives the nails false security on more complex locks allowing the tradesman to accomplish the job easier.

Is Using Bump Keys Easier than Raking the Locks?

Bump keys have gotten social media attention, making them a popular tool for beginners and professionals. However, Bump keys can be increasingly difficult to work with; they require the correct equipment, including dampeners and hammers. There is an array of different tools for bump keys that must be used. Check out our article comparing bump keys to lock-pick guns.

Bump Keys use the spring and tension system to push the pins in place when you tap the key with the hammer. The Keys are precisely cut and hard to duplicate and work best in sets. The bump key works on most pin tumbler locks and takes the same skill as single pick picking with higher security locks.

Bump keys force the pins higher into the tumbler cylinder, which can cause damage to the lock. The sheer line is created when all the pins have lined up accordingly, and the bump key is the most forceful method. Law enforcement, security, locksmiths, and first responders all use bump keys to provide service to the community.

Is Single Pick Picking Hard to Do?

Single pick picking is the tradecraft of any locksmith. Locksmiths refer to this craft as a skill set and compare it to an art. Every pick is different, and you must listen to the lock. Beginners start with more straightforward learning methods, such as raking the lock. Single pick picking uses a distinct set of tools over the raking method.

It Takes a Skilled Lockpicker

Single pick picking is where you separate the pros and beginners. Single pick picking (SPP) is effective on every lock. The different pick styles combined allow the artist to feel the inside of the lock with the picks. This method takes training and practice to master. The low-security locks are the easiest to learn, saving the more complex ones for later.

The Materials Can Get Stuck

The single pick-picking method tools consist of single-ended hooks and tips. These hooks and picks are designed to give the lock picker more control over the individual movements of the pins inside the lock. Unfortunately, these picks can get stuck, security pins released, pins that are not above the sheer line, and more.

Single-pin picking is harder to learn but does provide a deeper understanding of the practice and how locks work. This method makes it easier to identify problem areas, such as security measures installed in the lock. Single pick picking requires copious patience because it can take time to open a lock, depending on the skill set of the locksmith.

Do Lock Pick Guns Damage the Inside of the Lock?

Lock pick guns work with the raking method, which vibrates the pins inside the lock. Since the pins are being put into place imprecisely, this can damage the pins and sheer lines of the lock. In addition, since the pins must move vertically to align correctly, any deviation along the sheer line will cause damage to the inside of the locking mechanism.

The three most familiar places lock-picking guns damage in locks are:

Not to say that the lock will be unusable after such an experience; however, over time, the lock will continue to wear away on the inside of the lock where the pins are. Keys will begin to show wear also if there is damage to the sheer line and may even start to lose some of the height of the teeth on the key, making it more difficult to use.

Lock pick guns, both electric and manual, damage the sheer line inside the lock tumbler. Many lock-picking techniques will damage the lock pins inside the tumbler. However, skill makes up for the damage; the more skilled a person is at the trade, the less likely they are to damage the lock when attempting to pick it.

Whether the toothbrush method or the hand picking works better for a person is set in the hands of the person picking the lock. Therefore, it pays to know more than one way to create a lock-picking gun affordably and quickly. For example, a person could make a lock-picking gun using items found in most trash cans nationwide.