Lock Pick Gun Vs Bump Key: Which Is Better for Survivalists? 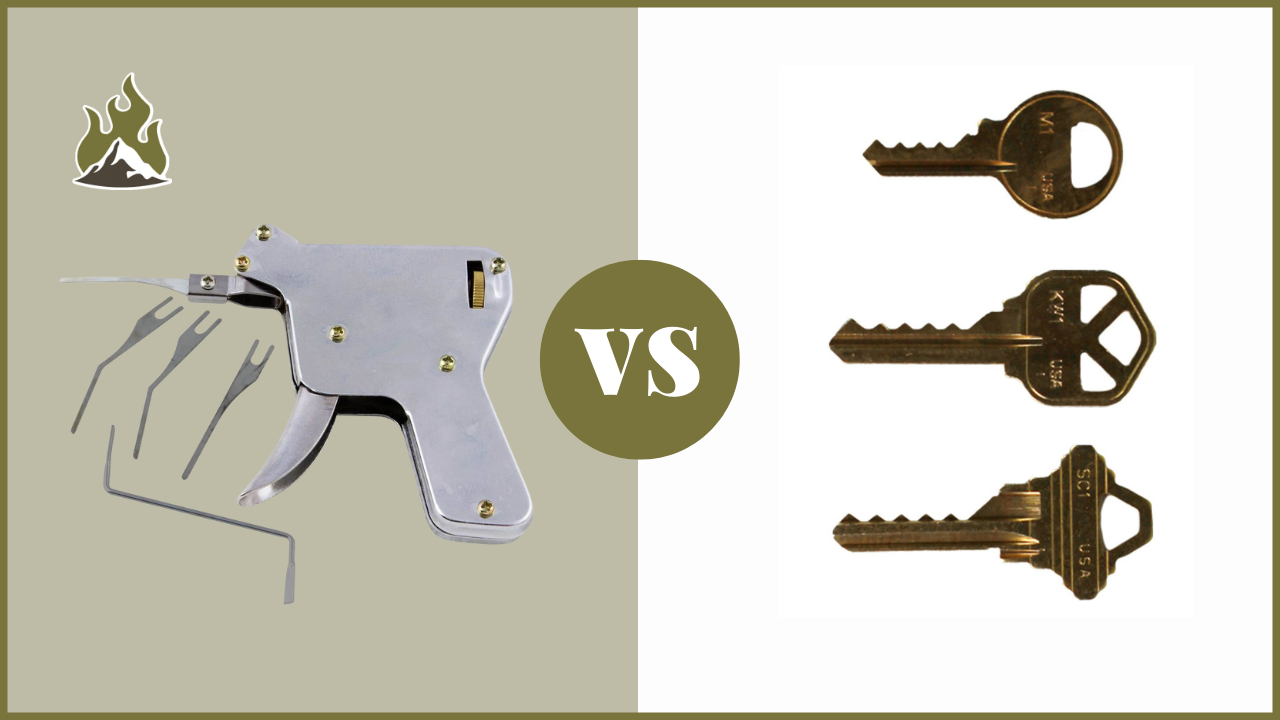 I’ve spent years experimenting with different ways to pick locks and as a survivalist, it’s a case of life or death, in the pick of a lock. Both the bump key and the lock pick gun are brilliant innovations when it comes to picking locks. But which tool is going to be your lifesaver?

This table provides a brief comparison between Lock Pick Gun and Bump Key:

We’ve got all the inside information on which tool is going to save your skin. When disaster strikes, and you need to open the lock the fastest for your survival, we’ll show you which option is better:

Will a Lock Pick Gun or Bump Key Suit My Skill Set?

Both the lock pick gun and bump key are relatively easy to use, so even for the beginner survivalist, when it comes to picking locks making use of either is a great option although the lock pick gun requires a bit more practice so it would be more suited to an amateur skill set. They both have their own particular advantages and disadvantages, but let’s face it; they’re both a lot easier to use than the old lock pick set that your grandpa used to use.

But let’s look at how to use a lock pick gun and a bump key, to see which is the more ideal tool for the day one prepper to have up your sleeve.

What Is a Lock Pick Gun?

A lock pick gun, also known as a snap gun, is a small gun-like instrument that uses the laws of physics to apply a force that momentarily frees the cylinder from the pins which keep it locked in, but will now allow it to move for a few seconds.

How To Use a Lock Pick Gun

The Lock pick gun is quite easy to use. First, the pick gun needle, a small steel rod, is inserted into the lock. Then the gun will fire the rod simultaneously against all of the lock pins. This briefly frees the cylinder and allows it to be turned by using a tension rod.

A lock pick gun, when used correctly, can open up a lock within a short time. However, the force which it releases onto the lock can cause damage to the pins, which could be detrimental to your escape or survival plans as it could break the lock.

Damage to the lock can be avoided by adjusting the thumbwheel on the side of the lock pick gun which determines the force that will be released onto the pins. This will take some practice to get used to, and it is always best to start with a low impact. If after a few attempts and you still haven’t made any progress; adjust the impact slightly until you reach the best pressure.

Check out our article on making your own lock-pick gun here.

Now that we know what a lock pick gun is and how to use it, let’s focus on its rival; the bump key:

What Is a Bump Key?

A bump key is a basic shaped key where the valleys (also known as teeth) are at their lowest, so they are able to enter a lock. There are different kinds of bump keys for different locks, so it is always advisable to have a set with at least five different types of bump keys so that you’re never caught without the right tool.

How To Use a Bump Key

With a bump key, you’ll do exactly what its name tells you; bump it. A bump key works by inserting it into the lock, and because the teeth of the key are only at the minimum height that they need to be to trigger the pins, this will allow the pins to be jolted into place and release the lock so that it can be opened.

Once you have the bump key in the lock, you’ll pull it out so that about one click of the key is out of the lock, then you need something you can hit the key with slightly, preferably a bump hammer, but a normal hammer or screwdriver can be used too.

The next part is important; you need to just slightly turn the key in the lock and hit the end hard enough to bump the pins of the lock. It may take a couple of hits to get the right angle, but once it’s in the correct position it’ll force the lock to pop. Voila! You’re in.

Before I recommend to you which tool, I consider to be best for the survivalist, take a look for yourself at the advantages:

Advantages of the Lock Pick Gun and Bump Key

Disadvantages of the Lock Pick Gun and Bump Key

As an expert survivalist, my personal preference is the bump key. It might not always be as fast as the lock pick gun, but with a decent amount of practice you could soon be opening locks with your eyes closed, metaphorically speaking.

In any survival situation, you might not have the space on you at all times to be able to carry around a lock pick gun and its tension wrench, so a bump key is a lot more convenient even if you have to carry around more than one key; we’re used to carrying around keys every day anyway. If you’re serious about prepping, this is one tool you can’t be without.