The Secret to Commerce in a Post-Apocalyptic World 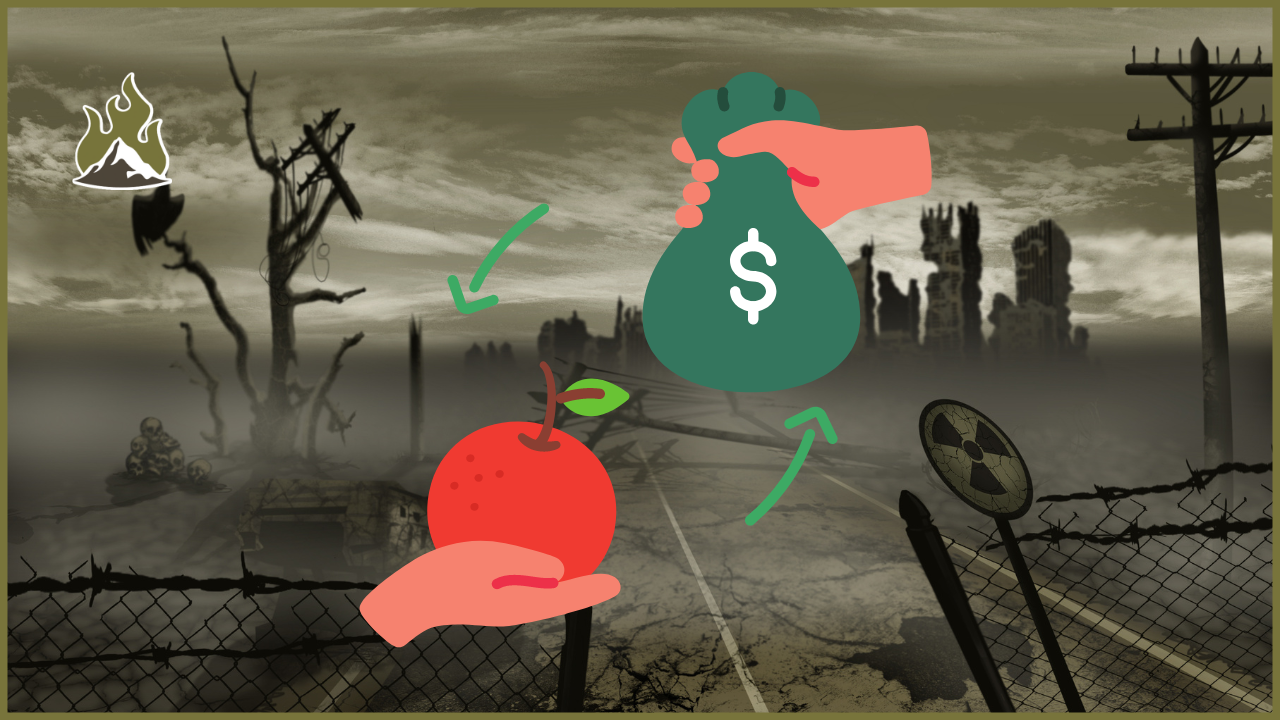 If you’re like most preppers, you’ve undoubtedly spent time thinking, and maybe even worrying about what commerce might be like if the world we live in ever succumbs to a doomsday-type event.

If you haven’t, you probably should! In a post-apocalyptic world, it won’t matter how much money you have stashed away in a bank account. Most preppers, including myself, believe that money will have little, if no value, at some point in the future.

So, if the almighty dollar won’t be able to buy you what you might need, how will goods and services be paid for in this type of economy?

The Bartering System Will See a Resurgence

There was a time when bartering was much more common than it is today. In the grand scheme of things, it hasn’t really been too many years since one could pay for the services of a doctor’s visit with things like chickens or eggs.

When money has little or no value, goods and services will be acquired by trading supplies, services, or skills. I for one, really like the barter system and as a matter of fact, our family actually does quite a bit of bartering to acquire the things that we either need or want.

Let me share a recent example with you. My husband enjoys creating metal art and a couple of weeks ago he was able to acquire a large quantity of sheet metal by bartering. A lady in our town happened to have quite a bit of scrap sheet metal that she wanted some simple designs cut out of. She couldn’t afford to have a local welding shop make the cuts that she wanted so my husband asked if she would be interested in trading the pile of scrap metal in exchange for him making the cuts that she wanted.

She gladly accepted his offer and it was a win-win scenario where no money exchanged hands. She was very happy to have what she wanted to be done and my husband was able to acquire supplies to feed his art habit without having to spend a dime.

How to Prepare for an Economy Based on the Bartering System

If you haven’t ever tried your hand at bartering, I highly suggest that you take the time to learn this “skill” sooner rather than later.

There’s actually quite a bit of finesse that needs to take place during the negotiation of the trade. If you’re a skilled negotiator, you’ll be able to position yourself to make good trades that are mutually beneficial to both parties. If you don’t take the time to develop this skill, there’s a very high likelihood that you’ll be taken advantage of by someone who is more skilled than you.

The world that we live in now where you simply walk into a store and there’s a price tag on every item and the world of bartering is quite different. A good trade is one where both parties leave feeling like they won when the deal has been completed.

When you walk into the store to buy groceries, there’s really not much skill needed to make a good deal. Sure, you need to know things like what a gallon of milk typically sells for to know if you’re getting a good deal but for the most part, most people simply place the items that they want to purchase in their cart and pay for them at the checkout stand. The price you see on the tag is the price you usually have to pay.

Bartering is quite a different matter altogether. It can be difficult to assign value to things like skills. For example, the sheet metal that my husband acquired in his recent trade would have cost him quite a bit of money to purchase at our local scrapyard but he has the tools and skills that the lady who owned the scrap metal didn’t have. In this situation, the lady didn’t place a monetary value on the metal. Instead, the intrinsic value was placed on both the metal and the process of cutting out the shapes.

Remember, it is actually a “process”. While negotiating, one party may suggest the terms of a particular trade, and the other person may reject the offer but reply with a counteroffer. This is all part of the art of making the deal.

Let’s take a minute and imagine what a typical negotiation might actually be like. In this make-believe scenario, let’s assume that I have a large garden and that I had a particularly good harvest of vegetables for the season. Let’s also assume that my neighbor raises farm animals such as chickens. If I hoped to be able to trade 50 pounds of my potatoes for 10 of my neighbor’s chickens, I wouldn’t approach my neighbor and say, ”Hey, would you be interested in trading 50 pounds of my potatoes for 10 of your chickens?”

When negotiating, your opening offer should never be what you really want. You should always expect a counteroffer and plan accordingly. When people are negotiating, they always want to feel like they got a good deal. It’s almost human nature to want to get the best deal that you possibly can so in this particular example if I wanted to end up with 10 chickens in exchange for 50 pounds of potatoes, my first offer might be something like 35 pounds of potatoes for 10 chickens.

By starting at 35 pounds, I’ve positioned myself to have a little room to negotiate and still end up with the deal that I originally wanted. In the best-case scenario, the person may REALLY NEED 35 pounds of potatoes and they might be willing to make that deal. In the worst-case scenario, they might say that they couldn’t possibly give you 10 chickens for only 35 pounds of potatoes.

This doesn’t mean that you still can’t come to a mutually beneficial agreement. It often just means that there’s still more negotiating to be done. In this case, if my neighbor were to reject my first offer, he might counteroffer and ask for 50 pounds of potatoes for 10 chickens which is the exact deal that I wanted to make in the first place.

This is another example of a win-win situation. I would end up with 10 chickens that I was originally prepared to trade 50 pounds of potatoes for and my neighbor would feel like he got a good deal because he was able to talk me into giving him an extra 15 pounds of potatoes in the trade.

If my opening offer would have been 50 pounds of potatoes for 10 chickens and my neighbor would have rejected the offer, I might have had to give him something like 75 pounds of potatoes or maybe only get five chickens in the trade. This is just a simple example of why it’s so important to learn how to become a skilled negotiator. Being successful in a world where goods and services are traded rather than paid for with traditional currency will absolutely depend on having good negotiating skills.

In addition to learning the art of being a good negotiator, you can prepare for living in a world where commerce is based on the bartering system by stockpiling supplies that will be easily traded. It’s no secret that if a doomsday scenario takes place, there will be a lot of hungry people out there who will do virtually anything for food. While you are stockpiling food for your family, you might want to consider storing additional rations that you can use to trade for supplies or services that you may need.

Other things to consider are what I like to call “luxury items”. I’m talking about the types of things that people will really crave. Especially when they can’t just run down to their local supermarket to buy whatever items they might need to feed a particular habit they may have acquired during their life. For example, when people are struggling to survive, something as simple as coffee could have tremendous trade value.

Let’s not forget that we live in a world where people are in the habit of paying other people to do simple things like mechanical repairs on their vehicles and homes. The number of people who are actually able to take some scrap material and sew clothing items is also pretty low these days.

With that in mind, while you’re preparing to survive in a post-apocalyptic world that is driven by the bartering system, take some time and imagine what life might be like. Imagine the types of items that you might need and that others might need. Imagine the types of skills that you might be able to develop now that could be of value to someone in the future. Spend some time brainstorming and you’ll be able to make a good list of the things that you should be doing now to prepare to survive this type of world.